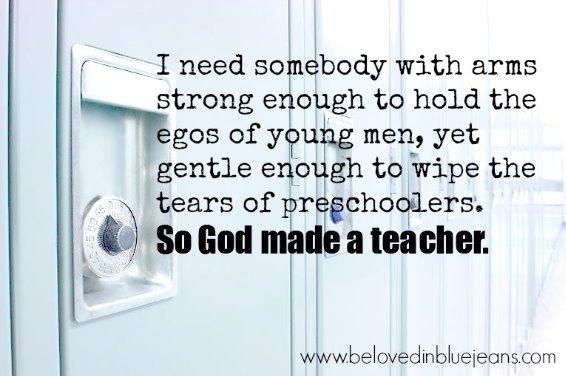 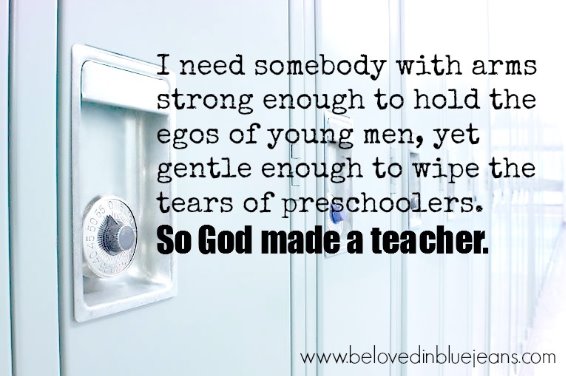 Paul Harvey gave the world a great gift when he made his “So God Made a Farmer” speech at the Future Farmer’s of America Convention in 1978.

In 2013, his words became a Superbowl Commercial for Dodge.   It touched my Midwestern-raised heart.

My grandfather was a farmer, my uncle is a farmer, and surely my cousin will be: A Farmer.

Missed that commercial ? Watch it here.

Mr. Harvey’s words are true and rhythmic and were my inspiration for this piece. Whether you are a home school, public school, private school, college, or preschool teacher: This is for you.

Because in the same way that God knew his land needed to be tended, he knew the hearts of children would need  to be held and mended. So God made a teacher. Here’s my version.  I’m no Paul Harvey… but I did my best.

And on the 8th day, God looked down on His children, big and small, and said  “I need a caretaker.” So God made a teacher.

God said, ” I need somebody willing to plan and pray before dawn, love without limits over and over, to teach language arts in grade school and algebra to college students.

I need people to spend all day next to chalkboards and PowerPoints, to plan and grade for hours, eat dinner quickly, and then work past midnight.  I need folks at school productions and football games and to bump into students at the grocery store.”

“I need somebody with arms strong enough to hold the egos of young men, yet gentle enough to wipe the tears of preschoolers.

I need protectors brave enough to be heroes when tragedy strikes.”

It had to be somebody to encourage, advocate, and challenge.  Despite the backdrop.  Whether it be in the classroom, on the college campus, or in the preschool parking lot. Someone to stand in the common areas: in the hallways and at recess,  to notice all the things kids of all sizes try to hide.

God said “I need someone to be the only hug that child of mine receives when she finishes 2nd grade.”  And someone to high-five that freshman boy who thinks he doesn’t want a hug. Someone who tells each of them to “come back real soon to visit.” And means it.

God said “I need somebody willing to sit in the bleachers and in the auditorium and watch that girl try to find herself on the stage and on the volleyball court. To watch her almost make the cut, over and over.  Then dry her eyes and say: “Maybe next year.”

I need somebody who can scoop goldfish into toddler’s hands and shape an insecure boy with no father figure into someone self-confident enough to tackle college.  Someone who can make a basketball team out of gangly self-centered boys, with nothing but an old gym, numbered shirts and no budget.

Someone who, from July’s pre-planning to the last spring pep-rally will finish a full year’s worth of work by the first of June.  Then,  during what parents refer to as their “summer vacation,” put in another 200 hours planning, purchasing, and praying for their next students.

God had to have somebody willing to ride the buses on field trips and to get pencils and scissors for those who couldn’t afford them or whose parents simply forgot.  Someone empathetic enough to stop and turn after seeing a hurt feeling form on a child’s face on field day.

God said, ” I need somebody strong enough to teach young minds to subtract and divide with pencils while multiplying the love in their hearts. Someone who will stop all of her planning for a day to decorate desks and doors for Valentine’s Day.”

It had to be somebody who would read them “Goodnight Moon” and “The Great Gatsby” and make them fall in love with Shakespeare. Somebody to seed, weed, feed, and rake their self-esteem.  Someone to plant seeds in little styrofoam cups and replenish their snacks and lunch money and their souls and finish a hard week’s work with a twenty-mile drive to a graduation party.   Somebody who’d weave a class of misfits  together with the soft, strong bonds of sharing.

Someone who would laugh,  and then wink at parents, and reply, “I know” with understanding eyes, when their student says: “I’m leaving for college and won’t miss this place a bit.”